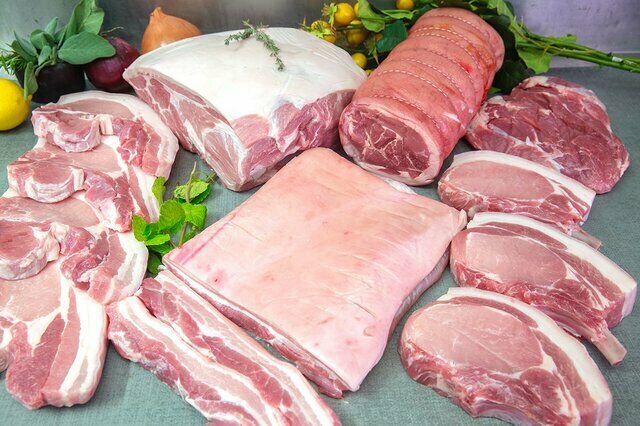 Pork is the culinary name for the meat of the domestic pig.

Pork is eaten both freshly cooked and preserved. Curing extends the shelf life of the pork products.
Ham, smoked pork, gammon, bacon and sausage are examples of preserved pork.

Pork is the most popular meat in the Western world.
It is also very popular in East and Southeast Asia including Mainland Southeast Asia, Philippines, Singapore, East Timor, and Malaysia.
This meat is highly prized in Asian cuisines, especially in China, for its fat content and texture.

Navigating yourself through the pork section at your local butcher or supermarket can sometimes be a hard task if you don’t know what you’re looking for to start with.
Don’t worry, we are here to help you understand the different pork cuts!
The following is a quick guide to what cuts of pork you might encounter and what they may be used for when cooking up a storm.
Please, refer to the pork cut diagrams while reading.

For a pork roast, it is best to use a meat thermometer to check the internal temperature of the meat – but this is not essential.

How to cook pork perfectly & exactly how you like it.