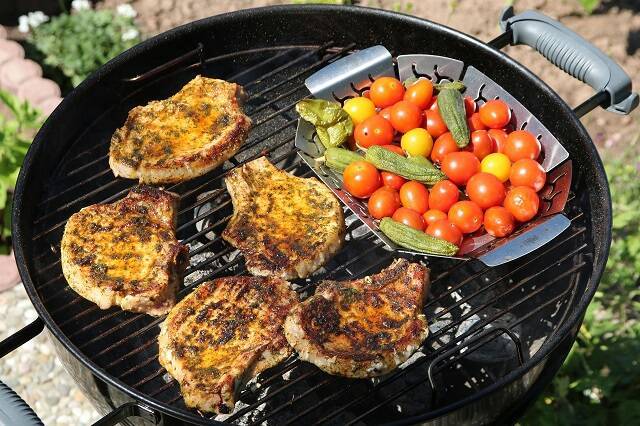 Barbecue or barbeque also known as BBQ or a barbie, is a cooking method, a style of food, and a name for a meal or gathering of people at which this style of food is cooked and served. How’s that for a barbecue definition, two different spellings two different abbreviations and 3 different meanings.

In today’s English, barbecue is the usual spelling of the word where barbeque is a secondary spelling that appears often in the names of restaurants and products.

There are several varieties of barbecue, with most falling into one of these categories, wood fired, gas-fueled or charcoal.

Smoking is the process of flavouring, cooking, and/or preserving food by exposing it to smoke from burning or smoldering material, most often wood.

Meat and fish are the most common smoked foods, though cheeses, vegetables, nuts, and ingredients used to make beverages such as beer or smoked beer are also smoked.

The BBQ can be used to cook meats, breads and other starches, casseroles, and desserts.
It uses direct and indirect heat to surround the food with hot air to cook, and can be basted in much the same manner as grilled foods.

We use our Hark smoker but a webber bbq or lidded barbecue are similar to a smoke pit.
This means that it allows for an open flame but cooks more quickly as it uses convection to cook.

In the United States, the use of the word grill refers to cooking food directly over a source of dry heat, typically with the food sitting on a metal grate that leaves “grill marks”.
Grilling is usually done outdoors on charcoal grills or gas grills, a recent trend is the concept of infrared grilling.

BBQ Grilling is done over direct, dry heat, usually over a hot fire for a few minutes at temperatures over 260°C or 500°F.

This method is an effective technique in order to cook your meats or vegetables quickly since it involves a significant amount of direct, radiant heat.

Braising on the barbecue combines direct, dry heat charbroiling on a ribbed surface with a broth-filled pot for moist heat.
When barbecue-braising, the grill performs like an oven.
You just put your pot or frying pan on the grill, put the lid on and let the meat simmer for several hours.

Before braising, normally you brown the meat directly on the grill, which adds extra flavour.
After braising, you can brush the cooked meat with a tasty glaze and finish it directly over the flame or on the hotplate.