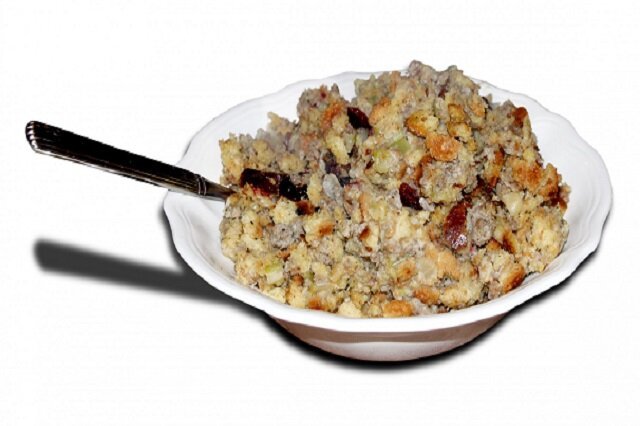 It wouldn’t be Thanksgiving or Christmas without a little stuffing. Check out delicious recipes that taste good with and without the turkey.

For some, stuffing is simply a side dish that they could do without if they had to.
For others, however, it’s the star of the meal (yes, even over that juicy turkey.)

So if you’re looking to impress the stuffing lovers in your life this year we’ve got a number of stuffing recipes that are sure to earn you applause.

Stuffing, filling, or dressing is an edible mixture, normally consisting primarily of small cut-up pieces of bread or a similar starch.
Stuffing is usuallyserved as a side dish or used to fill a cavity in another food item while cooking.

What foods can be stuffed?

Many foods may be stuffed, including eggs, poultry, seafood, pork, lamb, beef and vegetables, but chickens and turkey are the most common.
Stuffing serves the dual purpose of helping to keep the meat moist while also adding to the mix of flavours of both the stuffing and the thing it is stuffed in.

Poultry stuffing often consists of dried breadcrumbs, onion, celery, salt, pepper, and other spices and herbs, a common herb being sage.
Giblets are often used. Additions in the United Kingdom include dried fruits and nuts (such as apricots and flaked almonds) and chestnuts.

Many types of vegetables are also suitable for stuffing, after their seeds or flesh has been removed.
Tomatoes, capsicums (sweet or hot peppers), vegetable marrows (e.g., zucchini) may be prepared in this way.

Cabbages and similar vegetables can also be stuffed or wrapped around a filling.
They are usually blanched first, in order to make their leaves more pliable.
Then, the interior may be replaced by stuffing, or small amounts of stuffing may be inserted between the individual leaves.

What is stuffing made of?

Almost anything can serve as a stuffing.

Many Anglo-American stuffings contain bread or cereals, usually together with vegetables, herbs and spices, and eggs.

Middle Eastern vegetable stuffings may be based on seasoned rice, on minced meat, or a combination thereof.

Other stuffings may contain only vegetables and herbs.
Some types of stuffing contain sausage meat, or forcemeat, while vegetarian stuffings sometimes contain tofu.

Roast pork is often accompanied by sage and onion stuffing in England; roast poultry in a Christmas dinner may be stuffed with sweet chestnuts.
These may also be combined with mashed potatoes, for a heavy stuffing.

Fruits and dried fruits can be added to stuffing including apples, apricots, dried prunes, and raisins.

The stuffing mixture may be cooked separately and served as a side dish.
This may still be called stuffing or it may be called dressing. 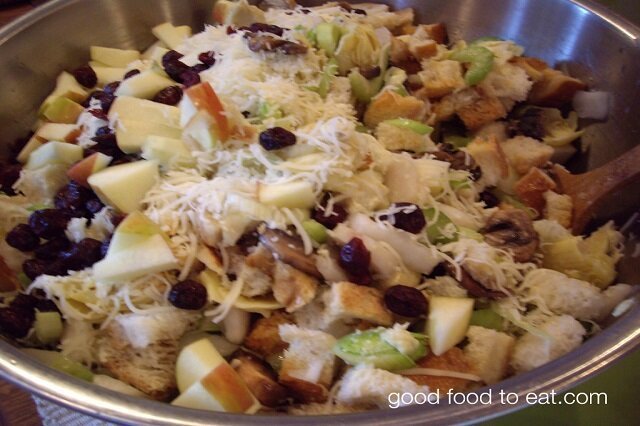 This is an all-time favourite turkey stuffing recipe that creates the best stuffing ever. It never fails to get rave reviews and goes great alongside both chicken and pork as…