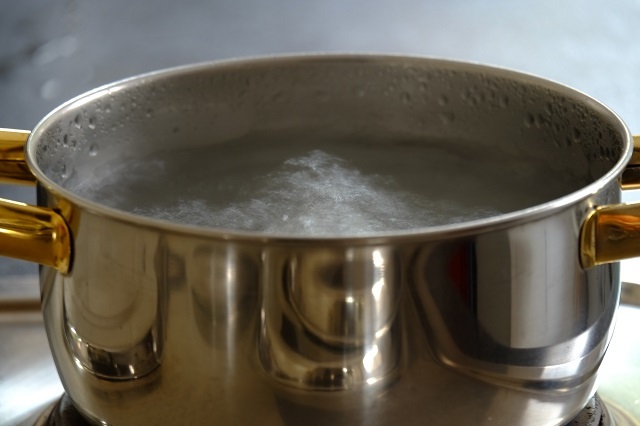 Foods suitable for boiling include vegetables, starchy foods such as rice, noodles and potatoes, eggs, meats, sauces, stocks, and soups.
As a cooking method, it is simple and suitable for large-scale cookery.
Tough meats or poultry can be given a long, slow cooking and a nutritious stock is produced. See how to boil below.

When liquids boil, bubbles break through and pop on the surface while the whole batch of liquid churns vigorously.
Bubbles are caused by water vapour, a gas, rushing to the surface.

What boiling does. In the case of pasta, churning, boiling water keeps the food in motion, prevents sticking, and cooks quickly so the pasta doesn’t get soggy.

Green vegetables are tossed into boiling water to cook as quickly as possible so they retain their flavour and bright colour in a process called blanching / Blanch.
If they were to simmer gently in a covered pot, their colour would dull, and they would lose much of their texture.

Boiling causes speedy evaporation, a useful effect for reducing sauces, where the volume of the liquid decreases and flavours are concentrated.

When ingredients are boiled, they are done so in water, sometimes containing salt and oil or butter for flavour and texture.
The food is usually added to the liquid once it reaches a boil.

This intense cooking method is well suited for pasta, some grains, and green vegetables. Boiling is also useful for reducing sauces.

A rolling boil is when a liquid is boiled rapidly with lots of bubbling.
This requires much more energy than simmering, and is often discouraged because it can break up or alter the shape of ingredients, whereas simmering will keep the ingredients whole.

To boil a food, usually a vegetable, until it is partially cooked.

To simmer or simmering is a food preparation technique in which foods are cooked in hot liquids kept just below the boiling point of water, but higher than poaching temperature.
To keep a pot simmering, one brings it to a boil and then reduces the heat to maintain the temperature.

Simmering ensures gentler treatment than boiling to prevent food from toughening and/or breaking up.
Simmering is usually a rapid and efficient method of cooking.
Food that has simmered in milk or cream instead of water is sometimes referred to as creamed.