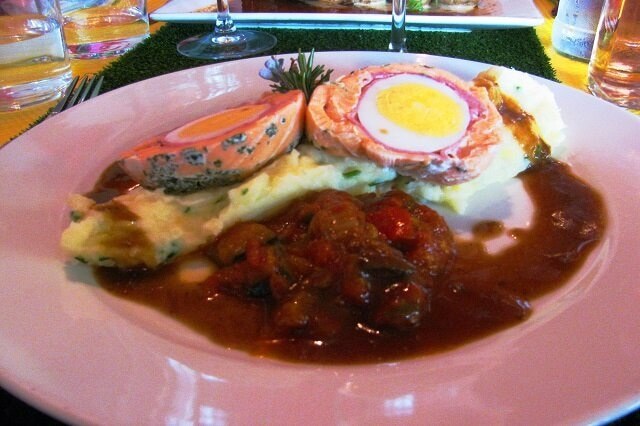 Au jus is a French culinary term meaning “with juice”.
It refers to meat dishes prepared or served together with a light gravy, or broth, made from the juices given off by the meat as it is cooked.
See how do you make au jus below

In French cuisine, the au jus definition refers to a natural way to enhance the flavour of dishes, mainly chicken, beef, veal and lamb.

In American cuisine, the au jus definition mostly referred to a light sauce for beef recipes, which may be served with the food or placed on the side for dipping.

How do you make au jus French style?

To prepare a natural jus, the cook may simply skim off the fat from the juices left after cooking and bring the remaining meat stock and water to a boil.
Jus can be frozen for six months or longer, but the flavour may suffer after this time.

How do you make au jus American style?

The American jus is sometimes prepared separately, rather than being produced naturally by the food being cooked.
An example could be a beef jus made by reducing beef stock to a concentrated form, (also known as Glace de Viande) to accompany a meat dish.

Jus can also be made by extracting the juice from the original meat and combining it with another liquid e.g. red wine creating a red wine jus.

A powdered product described as jus is also sold, and is rubbed into the meat before cooking or added afterwards.
Powdered forms generally use a combination of salt, dried onion, and sometimes sugar as primary flavouring agents.