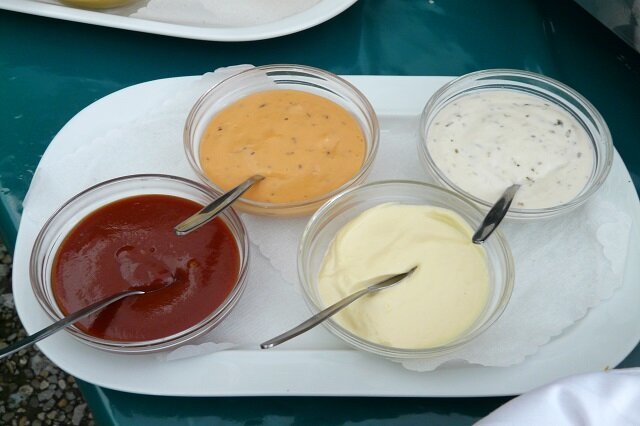 Emulsification in food means to put two or more liquids together that do not usually mix into one another, like oil and vinegar.
The process to emulsify commonly involves whisking one liquid very slowly into the other.

These substances will not mix or stay mixed with each other without the help of an emulsifier.

The process is called emulsification.
It’s what happens when you combine an oil and a water-based liquid like balsamic and can be a great cooking technique in creating creamy dressings and thick sauces.

Common emulsification in food is found in items from everyday life, for example milk, mayonnaise and vinaigrettes.
These are all relatively unstable without the presence of an emulsifier.
Although the egg is one of the most used here is a list of common food emulsifiers used to emulsify in cooking.

How to Emulsify Oil and Water

If you have a bowl of water and a bowl of oil, and try to mix them together the two liquids will not combine.
The result will be that the oil will just float on top of the water.
It doesn’t matter how hard you stir, whisk or shake, the oil and water will quickly separate again.

How to Emulsify Sauces

To make a successful emulsion sauce.

How to fix emulsion sauces

Sometimes, despite your best efforts, an emulsion sauce might still break on you. If this happens, you may be able to rescue it.
See the troubleshooting guide below for some quick fixes.

How to Emulsify Oil and Vinegar

Chef Stephen Gibbs of Hands On Gourmet demonstrates how to emulsify oil and vinegar.