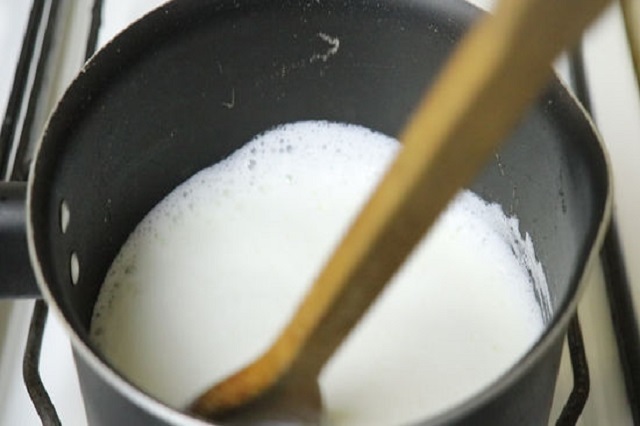 To scald or scalding in cooking means to heat a liquid until just below the boiling point, 82°C (180°F) by gently bringing the temperature up and stopping before it actually starts to boil.
Scalding tomatoes, fruits and vegetables for instance will help in removing the skin.

Scalded milk helps make breads, cakes, and other baked goods both light and fluffy.
Some baking recipes call for scalded milk; that is, milk brought nearly to a boil and then cooled down.
Scalded milk also helps;

The process of scalding kills off the protein that’s in milk, which helps the gluten to remain unbroken.

How to Scald Milk

Scald milk without film forming on the top or sugars sticking to the bottom.

How To Scald Milk Perfectly

In this video from Allrecipes, you’ll learn how to scald milk without film forming on the top or sugars sticking to the bottom.
You’ll see why a thick-bottomed pan is preferred for scalding milk and learn the best temperature for scalding milk.

How to Scald Tomatoes